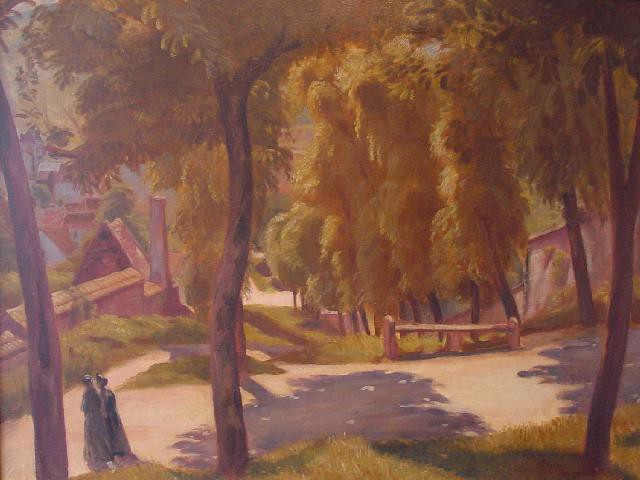 Emile Bernard (1868-1941) was one of the closest friends of Vincent van Gogh. In his younger days he stayed in Pont Aven where he also became friends with Paul Gauguin. Together they are considered to be the founders of the Nabis-movement. After the deaths of his friends Van Gogh and Gauguin Emile Bernard traveled around through the north of Africa and France. Le Gripaut is a small park in the French city of Tonnère, next to the house where Bernard lived for a while.

Émile Henri Bernard (28 April 1868 – 16 April 1941) was a French Post-Impressionist painter and writer, who had artistic friendships with Vincent van Gogh, Paul Gauguin and Eugène Boch, and at a later time, Paul Cézanne. Most of his notable work was accomplished at a young age, in the years 1886 through 1897. He is also associated with Cloisonnism and Synthetism, two late 19th-century art movements. Less known is Bernard's literary work, comprising plays, poetry, and art criticism as well as art historical statements that contain first hand information on the crucial period of modern art to which Bernard had contributed.

Between1886 and 1893, Emile Bernard regularly took his family on holiday to Saint-Briac, a small Breton village between the Bay of Mont-Saint-Michel and the Bay of Saint-Brieuc. He first met Gauguin there in 1886, but it wasn't until 1888 that the two artists met up at Pont-Aven, where they shared their research into the radical simplification of shapes, into abandoning traditional perspective, and using flat areas of colour outlined by dark contours recalling the leadwork of stained glass.

During his stays in Brittany, Bernard turned towards the day-to-day tasks of the peasants, like those of the harvesters in this painting, already celebrated by Millet. The landscapes, haystacks, houses, and men are given a broad treatment by eliminating details in order to retain only the coloured shapes that punctuate the canvas. The beauty of the gestures and of the landscape seem to illustrate the description of Brittany expressed by the English writer Henry Blackburn in his book Artistic Travels published in 1892: "Nowhere in France are there finer peasants; nowhere do we see such dignity of aspect in field labour, such nobility of features amongst men and women reaping and carrying their small harvest of corn and rye, oats and buckwheat". Here, we are immediately reminded of the painters of pastoral scenes: Jules Breton, Millet, Troyon and Rosa Bonheur".

In the spring of 1891, Emile Bernard fell out with Gauguin, accusing him of taking all the credit for the new aesthetic for himself. He moved closer to Cézanne, as seen in this very powerful and geometric painting, with its "rough humanity" as the critic Gustave Geffroy declared at the Salon des Indépendants in 1892.