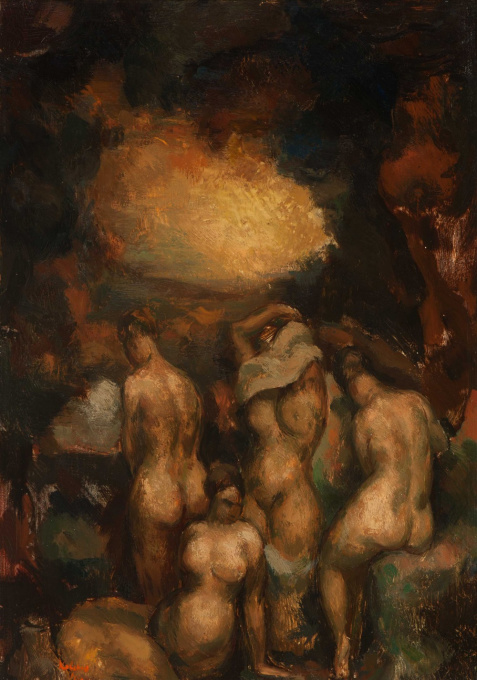 Toon Kelder was inspired by the Parisian avant-garde artists and he developed a highly personal style in the early years of the twentieth century.
Later on the dark expressionist paintings of Toon Kelder turned in light luminist work. His subjects ranged from landscapes and interiors to nudes and still lifes. After World War II he broke with figurative art and he rejected the use of oil paint. From then on he only worked with gouache and watercolor paint and his abstract compositions he built up with black, white and gray tones.
At the same time he started working as a sculptor. One of his abstract sculptures is in the collection of the MoMA (New York)
Toon Kelder exhibited in several major museums in Holland and abroad.
His work is represented in the Rijksmuseum, the Stedelijk Museum in Amsterdam, the Gemeente Museum in the Hague, Groninger Museum, the Carnegie Museum of Art in Pittsburgh and the MoMA in New York.

Toon Kelder is one of a number of painters inspired by the Parisian avant-garde artists to develop a highly personal style in the early years of the twentieth century. At the same time, his work was shaped by a constant drive to innovate. In the 1920s he painted flowers, figures and nudes – mostly using his wife Alexandrine as a model – all rendered in expressive colours. Through the 1930s up to around 1945, he evolved subtly stylised female forms depicted in soft, hazy hues, but also riders on horseback and mythical figures in wooded landscapes. After 1945 he gave up figurative painting and devoted himself to creating abstract sculptures. He spent some time in Antibes where he made nice ink drawings. He is considered to be a member of de Nieuwe Haagse School.