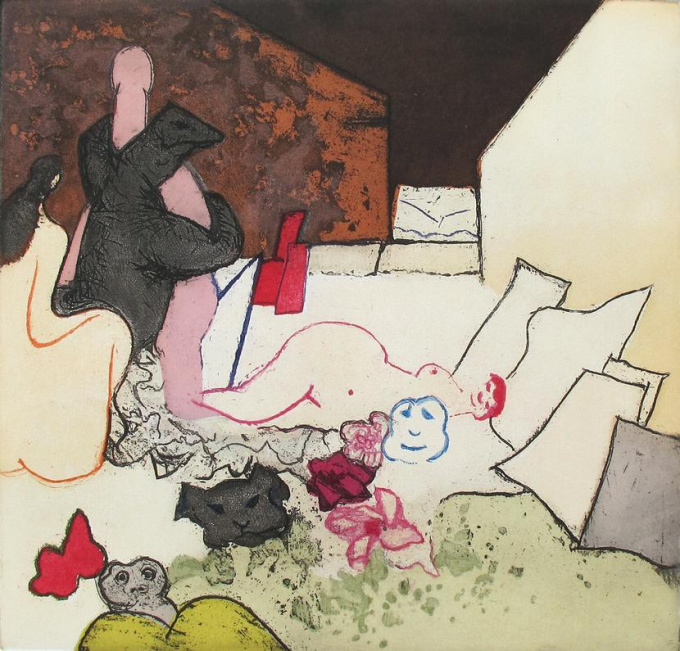 The Alliance between Casanova and morality 1979

CONSTANT - THE ALLIANCE BETWEEN CASANOVA AND MORALITY, from the album Plaisir et Tristesse de L'Amour. Aquatint, etching 1979. From the edition of 99 copies, numbered and signed in pencil. Illustrated in 'Constant - Grafiek' no. 130.

Constant (Constant Anton Nieuwenhuys) was born on July 21, 1920 in Amsterdam and started his career as a painter. Together with other experimental artist like Corneille and Karel Appel he founded the Dutch Experimental Group. Of the members Constant was the most important theorist and the most engaged in politics.

During his stay in Paris in 1946 Constant met Asger Jorn, a Danish experimental artist, and they became friends. Jorn discussed his ideas about purely abstract art being an illusion and found a supporter in Constant. They both agreed on the need for an international experimental group and in November 1948 the CoBrA group (Copenhagen, Brussels, Amsterdam) was founded in Paris.

Collectiveness, experiments and the struggle against the old conventions in art were the most important driving forces within CoBrA. Animals, primitive art, myths, the art of children and the mentally ill were significant sources of inspiration. After several exhibitions, of which Amsterdam 1949 and Liège 1951 were the most important ones, the CoBrA movement seized to exist and the artist went their own way. Constant also moved on.