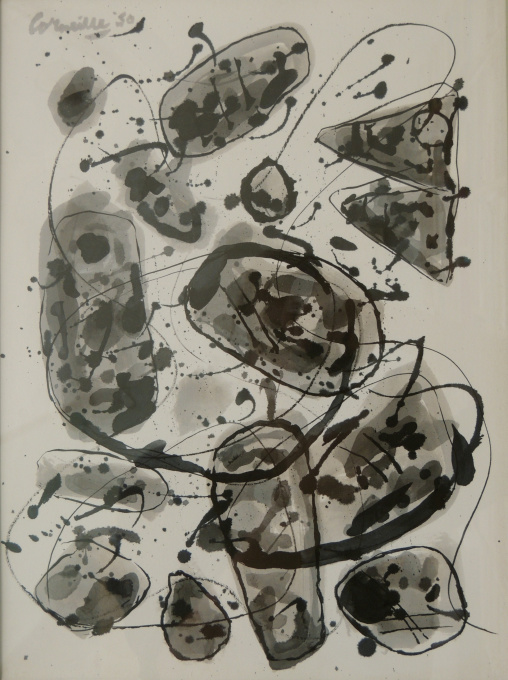 Guillaume Cornelis van Beverloo was born on July 3, 1922 in Liege, Belgium. He is better known under his pseudonym Corneille and is a Dutch artist.

Although mostly self-taught, Corneille studied art at the Academy of Art in Amsterdam, in the Netherlands. He was one of the founders of the Experimentele Groep Holland in 1948 and in 1949 he was also one of the founders of the COBRA group, together with Karel Appel, Jan Nieuwenhuijs, his brother Constant Nieuwenhuijs and the Belgians Christian Dotremont and Joseph Noiret.

Cornielle was active within the group from the beginning, not only painting but also publishing poetry in the Cobra magazine. The poetic Corneille was strongly influenced by Miro, Klee and Picasso. After the group dissolved in 1951 he moved to Paris and began collecting African art. These primitive artifacts became evident in his works, which began to take on a more imaginative style, like landscapes seen from a bird's eye view, exotic birds and stylised forms. He lived together with the Dutch photographer Henny Riemens (1928-1993).

From the 1960s his work became more and more influenced by his African art and this lead to Corneille developing a more figurative style where women, birds, flowers and figures played a significant role. Corneille believed painting was not a job or hobby but a call.

Corneille died on September 5, 2010 at the age of 88 in France, where he lived and worked. He had lived in the Maison d’Oise in Val d’Oise for the last years of his live. Corneille was buried at the graveyard of Auvers-sur-Oise, where in 1890 Vincent van Gogh was also buried.