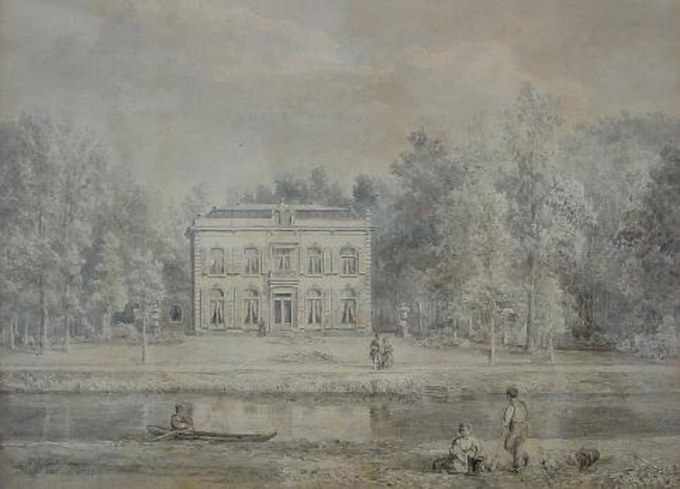 The landscapepainter, etcher and lithorapher P.J. Lutgers (1808-1874) lived most of his life in Loenen aan de Vecht. Over a period of thirty years he made many drawings of the scenery of the river Vecht.
In 1836 he published lithographs of his drawings in a book titled 'Gezichten aan de rivier de Vecht' (Views of the river Vecht). The original print of this book is also for sale at Kunsthandel Pygmalion. This watercolour is a preliminary study of the lithograph of this manorhouse in the book.

In 1808 Lutgers was born in Amsterdam. Son of Joannes Lutgens and Elizabeth Cornelia van Kampen.
He painted landscapes, city- , river-, and seascapes, but portraits as well. He is known for his serie of painting from Utrecht and surroundings; especially near the river Vecht. Besides that he made drawings from several other places in the Netherlands like Almelo, The Hague, Haarlem, Leiden, Rijswijk, Utrecht and Velsen. He published his works as lithographs. One of his pupils was Nicolaas Bastert.

He died in Loenen aan de Vecht at age of 65. He was married with Maria Susanna Moen.