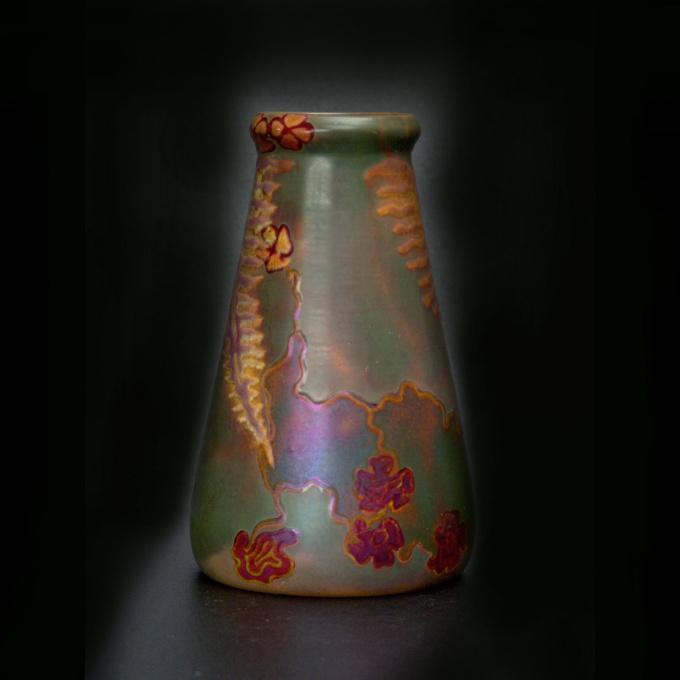 Eosin glaze vase with a symbolist design of ferns, leaves and flowers.

Zsolnay, or formally Zsolnay Porcelánmanufaktúra Zrt (Zsolnay Porcelain Manufacture) was born in 1853 in Hungary.
He is a Hungarian manufacturer of porcelain, tiles, and stoneware. The company introduced the eosin glazing process and pyrogranite ceramics.

The Zsolnay factory was established by Miklós Zsolnay (1800–1880) in Pécs, Hungary, to produce stoneware and other ceramics in 1853.

In 1863, his son, Vilmos Zsolnay (1828–1900) joined the company and became its manager and director after several years. He led the factory to worldwide recognition by demonstrating its innovative products at world fairs and international exhibitions, including the 1873 World Fair in Vienna, then at the 1878 World Fair in Paris, where Zsolnay received a Grand Prix.

By 1914, Zsolnay was the largest company in Austro-Hungary. During World War I production of pottery and building materials were curtailed, and the factory produced for military use, for instance insulators.

After World War I the fortunes of the factory declined due to the Serbian occupation, loss of markets, and difficulty to secure raw materials. However, after the depression, conditions improved. During World War II its site of production in Budapest was bombed. With the rule of communism the factory was nationalized in 1948.

Eventually, the Zsolnay name was dropped. The Pécsi Porcelángyár (Pécs Porcelain Factory) was used primarily to produce common tableware goods. However, in 1982 with the resumption of a market economy, the company regained its operational independence, was reorganized, and the Zsolnay name returned.

In 1991, the Zsolnay Porcelain Manufacture became a stock company, and five years later it was bought by a private equity enterprise. In September 2008 a contract was concluded with the Swedish company, IKEA. According to the contract, Zsolnay will deliver 5,000 tonnes of ceramics per year from September 2009. This deal will triple the sales of Ft 1,1 billion (€4,4 million)for Zsolnay.