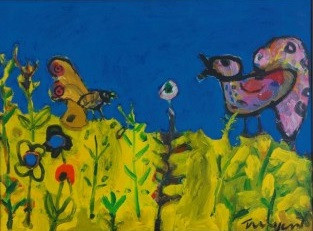 Hans Truijen (1928, Surabaya, Indonesia – 2005, Klimmen (Voerendaal), Limburg) was a Dutch painter, draughtsman, glass painter, wall painter and monumental artist. He also made gouaches, mosaics and stained-glass windows. When Hans was three, the family moved from Indonesia to the Netherlands, where they stayed in Tilburg for two years. Thereafter Hans grew up in The Hague. From 1949 to 1955, he studied under Jos ten Horn and Thé Lau at the Jan van Eyck Academie in Maastricht, where he graduated with honours (cum laude). In 1957, he received a Scholarship for freehand painting. In 1956, he was awarded a Golden Medal of St Gobain. Truijen created stained-glass windows for many churches (some of them in Pop Art style). For the railway stations of Heerlen and Voerendaal, he designed 80 windows, whose pictures refer to travelling. Truijen lived and worked in Maastricht, The Hague, Meerssen and Klimmen (1961-2005). His works are in the collections of the Bonnefantenmuseum, Maastricht; the Gemeentemuseum, Roermond; and Museum van Bommel van Dam, Venlo. In 1997, he became a Ridder in de Orde van Oranje-Nassau (Knight in the Order of Orange-Nassau) for his contribution to painting.