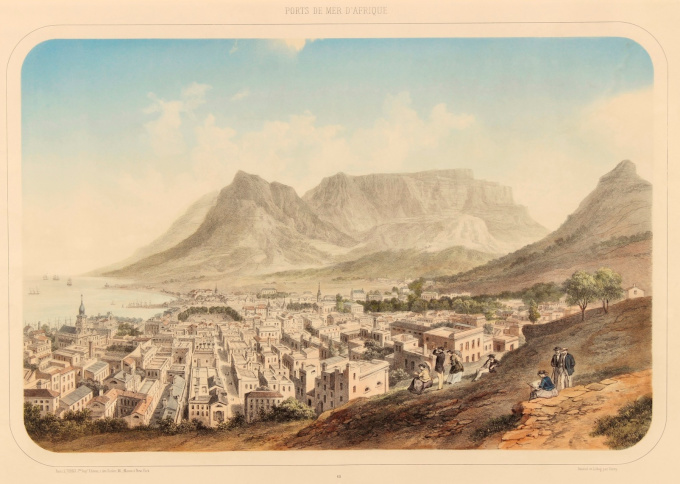 This wonderful view of Cape Town is from Signal Hill overlooking the city, with Table Mountain and Lion’s Head peak in the background.
In the late 16th century, Portuguese, French, Danish, Dutch and English ships regularly stopped over in Table Bay en route to the Indies. They traded tobacco, copper and iron with the local Khoikhoi (Hottentots) in exchange for fresh meat. In 1652, Jan van Riebeeck and others of the Dutch East India Company (VOC) were sent to the Cape to establish a way-station for ships travelling to the Dutch East Indies, and the Fort de Goede Hoop (later replaced by the Castle of Good Hope). The settlement grew slowly during this period, as it was hard to find adequate labour. This labour shortage prompted the authorities to import slaves from Indonesia and Madagascar.
In the 18th century, Great Britain moved to take control of the Dutch colonies. Britain captured Cape Town in 1795, but the Cape was returned to the Netherlands by treaty in 1803. British forces occupied the Cape again in 1806 following the battle of Bloubergstrand. In the Anglo-Dutch Treaty of 1814, Cape Town was permanently ceded to Britain. It became the capital of the newly formed Cape Colony, whose territory expanded very substantially through the 1800s. With the expansion, came calls for greater independence from Britain, with the Cape attaining its own parliament in 1854.
It was in those turbulent times that this very rare lithography was published as part of a series of city views under the heading “Ports de Mer d’Afrique”.

Isidore Deroy (1797 – 1868, Paris) was a painter, aquarellist and lithographer. He was a pupil of the architect Félix and the painter Cassas (a neoclassicist of the early 19th century). He produced French landscapes and (sepia-)drawings of animals. A part of his works was included in the galleries of the duchess of Berry and the duke of Orléans. Deroy exhibited in the Salon de Peinture et de Sculpture in 1810, 1812, 1819, 1822 and 1827. He obtained a medal (third class) in the Salon as a lithographer. He treated many subject matters for the Musée de l’Amateur.