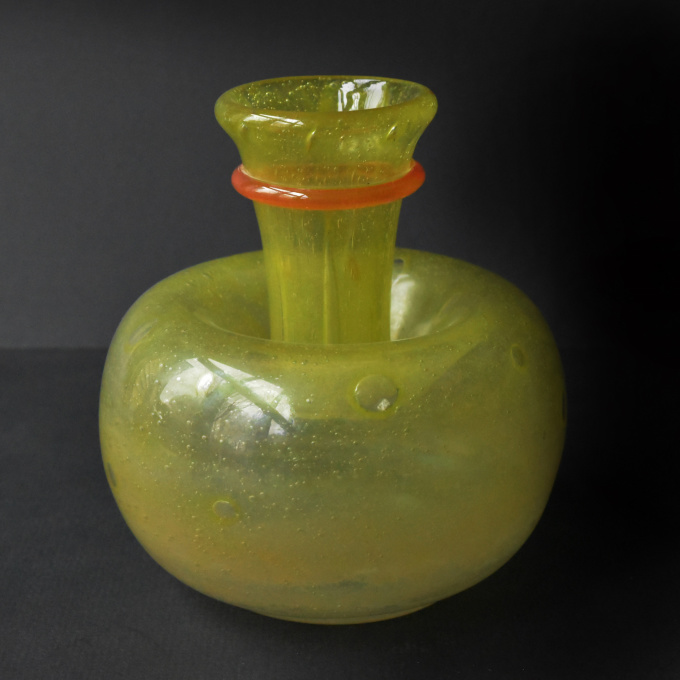 The beauty of the colored glass and the air bubble inclusions together with the subtle rare form are enough to let this vase sarcle like a real gem. Charles Schneider is known for his bright colored art deco glass of which the non etched sparely decorated examples are the most modernistic and rarest.

Charles Schneider was an Art Deco glass artist, born in Elzas, Germany, in 1881. Later Schneider moved to Nancy, one of the most important cities of eastern France at the time. In 1898 Charles Schneider was employed by the glasswork company of Daum, in 1902 his brother Ernest joined him. Whereas Ernest was known to be more of a business figure, Charles chose to invest in his creative talents. He started following classes in engraving, decorating, drawing and modelling, under skilled wings of Henri Berger i.a..

In 1904 he applied to the Ecole des Beaux-Arts in Nancy and later in Paris. During the period of his education, he started to produce a number of art nouveau statues of bronze, all of which were signed 'Ch. Schneider Nancy'. Because of the rarity of these sculptures, the objects possess a high value nowadays. In 1906 Charles held his first series of exhibitions in Paris. In a number of archives can be found that Schneider was known to design vases in a free-lance manner.

These developments were part of the reason that Charles and Ernest established a company of their own, after investing in a small glass factory in Epinay-Sur-Seine in 1913, under the name 'Verreries Schneider'. Apart from the producing of the more common kinds of laboratory glassworks and bottles to keep their company running financially, they started introducing the series of glassworks incorporating naturalistic patterns in a new, Art Nouveau style we are familiar with today. Schneider passed away in 1953.