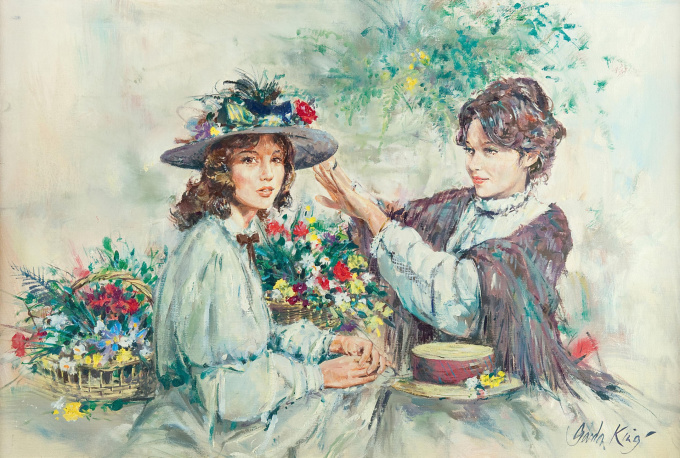 Gordon King is a British painter. Born in 1939, he studied life drawing and painting at Reading University after the war. Later he trained as an illustrator at Carlton Studios. At 22 he became freelance, working for magazines and advertising agencies, illustrating books and developing his portraits and paintings.
King’s paintings of girls in natural surroundings soon became his trademark and the popularity of watercolours in the early 80s together with the success of his prints, limited editions and silk-screens brought him the high profile that he has today.
King has had multiple one-man exhibitions and regularly exhibits at the Royal Academy Summer Exhibition and the Royal Institution of Painters in Watercolours. Galleries throughout Britain, the U.S. and Europe exhibit his paintings.
He has published two books, ‘A Romance with Art’, in 1995 and ‘Drawn to Life’ in 1999, featuring a wide range of his oils and watercolours. He lives and works in his studio in Buckinghamshire which provides the backdrop for many of his paintings. He was voted Published Artist of the Year by the Fine Art Trade Guild. He has been featured painting live on a number of British television programmes. King has also painted celebrity portraits and has supported various charities over the years.