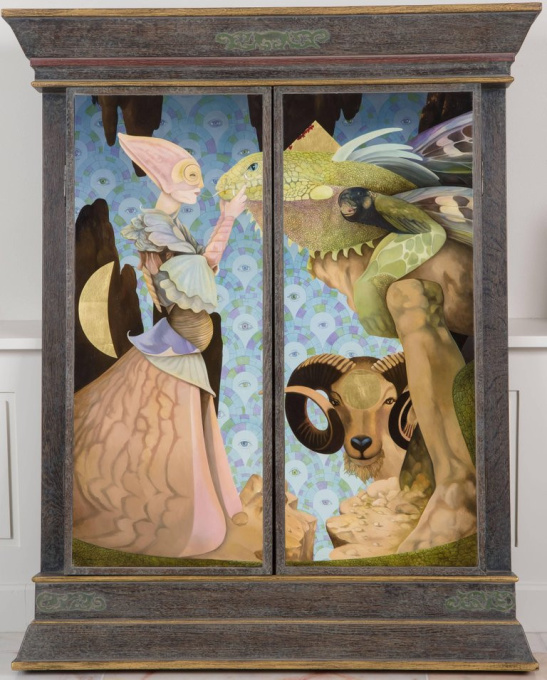 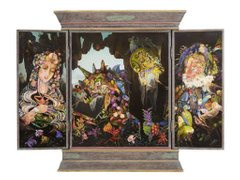 The triptych of the golden fleece (the back of the panels)
Lengrand wanted to make the dragon cry when leaving Medea and giving him Spirit, symbolised by the golden triangle, conjunction of the sun, the Aries and of the Moon, Medea.

Jean Michel Lengrand was born in 1955 in Paris. He studied the art of painting and drawing in different studios. There have been exhibitions of his works in Paris, Amsterdam, Rotterdam, Berlin, Düsseldorf, New York and Maastricht.
For a long tim he has been studying the field op philosophy, of theology and of symbolic structures within myths. He is the painter of the world of archetypes, which create timeless visible images behind myths and religions even in the unconscious; and which are allegorists - but to a tradition of elevating and metaphysical strenght like existed in the old Egypt where art had an initiating character, just like in Pythagoras' Greece, in the Renaissance and in Byzantine philosophy where the work was an appearance of the Spirit. It is the philosophy of the icon against the idol, decorative, esthetic and empty form of the Spirit.
In this world, where all attempts are already done, which in itself undoubtedly is the beginning of Art, he realizes a projection, an appaerance of the Spirit. It is profound work forming a connection between craftmanship of a great artist and the expression of a high spirituality.

His grandfather was a painter and as a child, Jean-Michel Lengrand (born in 1955), who was born in Paris, knew he wanted to follow in his footsteps. The artist does not opt for aesthetic art, but wants Art as an expression of the metaphysical, and calls himself an 'alchemist'. The performances are 'realistic', sometimes inclined towards surrealism and/or magical realism. Based on philosophy and theology, the paintings contain many 'archetypal' symbolism and often depict themes from Greek myths and motifs from the Old Testament.