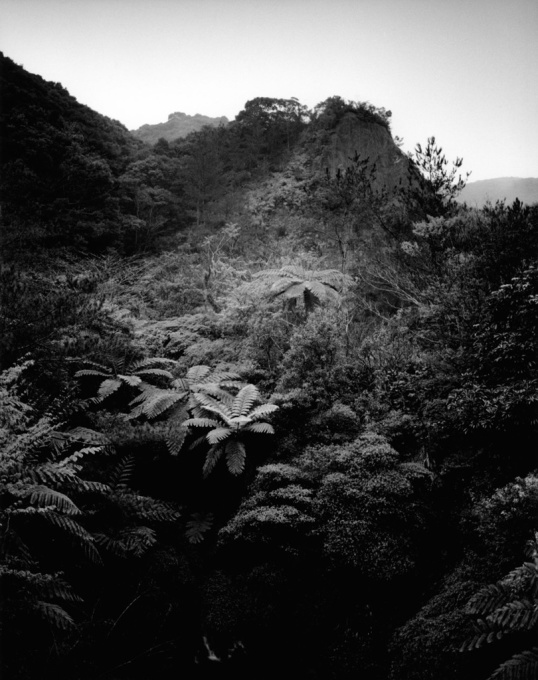 The Nurturing Island is a research-based project about a subtropical island in the south of Japan. The Nurturing Island was exhibited at SMART Project Space in Amsterdam as part of an international group exhibition: For the Birds. The exhibition examined songs and music as a social phenomenon – particularly in relation to its manipulative, participatory and motivational characteristics in the public sphere. For her installation of The Nurturing Island within this exhibition, Bates combined black and white landscape photographs with an audio track on which daily tannoy announcements from the island are recorded.
Through the black and white landscape photographs Bates captures the essence of the power and beauty that dominates the island and preserves the rich mythology and belief system. Layered with the audio track it is almost as if the sacred mountains of the island, protected by the presence of Habu poisonous snakes, breathe their command over the inhabitants. The material juxtaposition creates a disquieting interplay that touches on our human fragility, explores unexpected structures, tensions and histories, and perhaps ultimately becomes a form of fiction.

British photographer Emily Bates graduated from Glasgow School of Art in Scotland. She currently lives in Amsterdam and London. Bates combines photography with sound and moving images in many of her works. An interest in cultural traditions, in particular human relations, spirituality and mythology, is reﬂected in Bates’ photographic work. She subtly emphasizes the human relationship to the land surrounding him and explores the vulnerability, isolation and desire in the human condition. Bates became recognized for a body of work made during the 1990’s which were constructed from knitted human hair, such as Dress, Depilator and Sibilla. These works have been exhibited in Europe as well as in the USA and Japan. In 1997, she was awarded the prestigious Scottish Arts Council artists residency in Amsterdam, where photography became a large focus of her working practice. Afterwards she received more artist residencies and her work has been exhibited in numerous galleries and museums throughout the world, including the Barbican Centre Curve Gallery in London; the National Museum of Modern Art in Kyoto; Yokohama Museum of Art