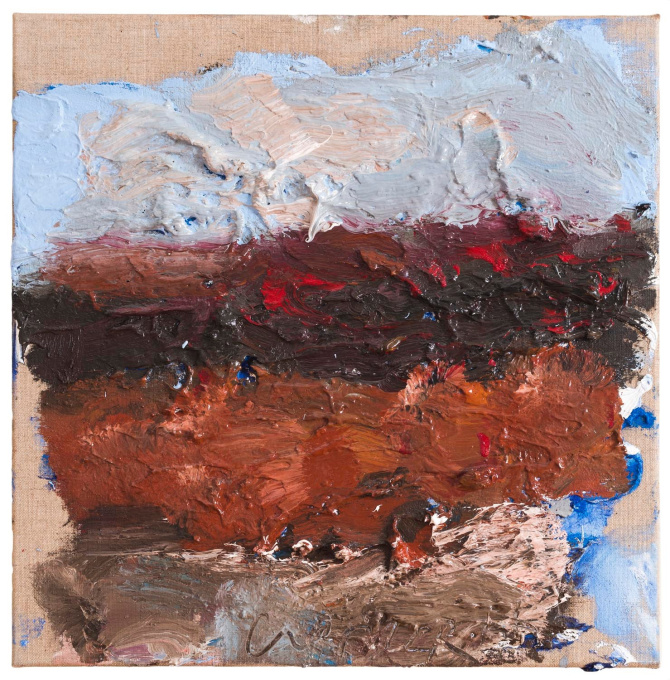 
About the Artist - 8 more artworks

Jan Cremer (Enschede, 20 April 1940) is a Dutch writer and visual artist. Jan Cremer is best known for the novel Ik, Jan Cremer from 1964 and Ik Jan Cremer, second book from 1966. His second book has been compared to On the Road by Jack Kerouac. Cremer has a sharp ear for vulgar, humorous language and an eye for the absurd side of American glamour, which makes him related to Louis-Ferdinand Céline and Nathanael West, especially in Ik, Jan Cremer Derde Boek and Made in U.S.A..

Jan Cremer was educated at the art academies of Arnhem and The Hague, where he lived in the Annastraat.
Cremer's literature and visual art show striking similarities. Both focus on freeing themselves from traditional aesthetics and age-old cultural baggage, as the following quotations illustrate:

Both quotes reveal his ability to shock or at least attract attention and sell himself as a daredevil with provable talent (cf. James Dean): experiencing culture as a burden fits into this picture. Ik Jan Cremer in particular, but also his 'peinture barbarism', similar to that of Karel Appel, have caused a great shock in society. Actions such as hanging a card of fl 1,000,000 from a painting (he was only 18 years old at the time) and the loud honking along the ball of books have made him an enfant terrible of Dutch art and literature.
The literary relevance of Cremer's work is mainly embodied in Ik Jan Cremer. Central to this is the liberation of the ideals of the 1950s. It is a harbinger of free sex and the wild 1960s. This explains why Cremer was also widely read outside the Netherlands. This also gave rise to criticism. Parliamentary questions were asked about the book, it was called fascist and football hooligans were accused of "Jan Cremerism".

Cremer himself cooperated a great deal with this, because he saw the commercial possibilities of it. When a diligent policeman in Hengelo confiscated copies of Ik Jan Cremer at the beginning of 1964, statements of support from concerned parents appeared in several newspapers. They all turned out to have been written by Jan Cremer.
Since 1970 Cremer has been able to combine his work with his love of travelling and wandering. He travels six months a year, the other months he divides his time between writing and painting. Many of his travels are a reconstruction of the migration of the Huns under Attila and the Mongols under Djenghis Khan. Cremer feels a strong bond with these peoples, even before a genealogist discovers that he himself comes from Mongolia on his mother's side.

After 1970 he concentrated mainly on lithography, which resulted, among other things, in a number of tulips 'Dutch landscapes'. He tells about Holland as only an emigrant could do, talking about a wide country with beautiful colours, an empty blue sky, a green meadow, sculptures of yellow cores on a mowed down land (...). If you are going to name something like that, then such representations fit under the heading of a doll. (...) But with him pop does not only mean popular but also really popular,' wrote Wim Beeren, director of the Boijmans Van Beuningen museum. His visual work is continuously exhibited in large one-man exhibitions at home and abroad.
Cremer is portrayed by Remco Campert in his novella Tjeempie! Or Liesje in Luiletterland perverted as the Predator, as one of the modern writers who is going to visit Liesje. In this novel Cremer is described as an aggressive mourner for whom everyone crawls into the dust. He knows it's about "munnie in the pussy and a bebie in bed", and instead of a car he has a golden helicopter. Of all the modern writers, he is described as the worst: "he is not a man but an animal".

In 1999 the collection of short stories De Venus van Montparnasse (The Venus of Montparnasse) was published, a collection of twelve literary reports from Cremer's journalistic repertoire. On 30 November 2000 he was appointed Knight in the Order of the Dutch Lion. In his book De Hunnen (The Huns) Cremer fiercely criticises the government in London during the occupation in the Second World War, which called for the railway strike in 1944. According to him, this strike in fact caused the Hunger Winter, because it meant that food from the northern parts of the country (including potatoes from Groningen) could not be transported to the big cities in the starving west of the country.
From 10 to 27 June 2013, Cremer had more than a thousand works of art, photographs, letters and other personal documents and objects from his possession auctioned off.

His son Cliff Cremer (*1965) published the book Bomberjack in 2000, in which he imitates his father.

In 2020 the Frans Banninck Cocq medal was awarded to him. The medal is awarded to Amsterdammers who have made themselves particularly meritorious in, for example, the cultural field. Deputy mayor Rutger Groot Wassink called Cremer 'a predecessor and an advocate of free Amsterdam as we know it today and where everyone is welcome'.