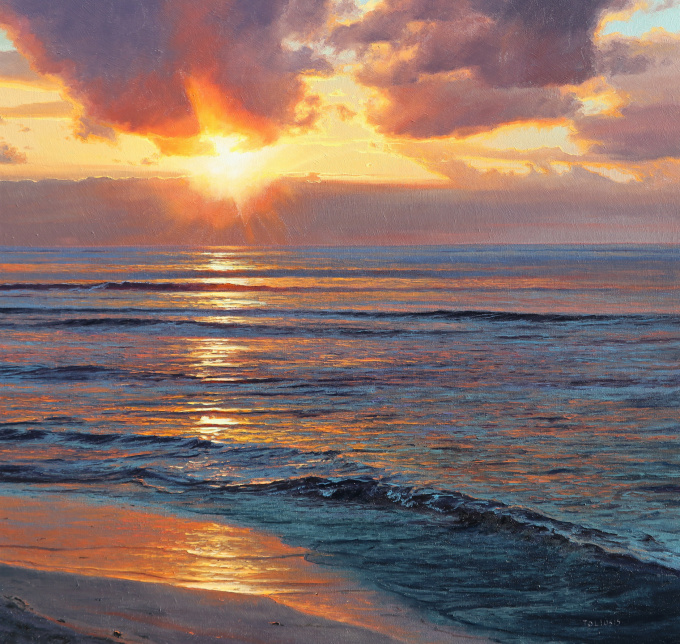 Gallery The Obsession of Art

Do you want to buy this artwork?

When Erika Toliusis paints, every application is deliberate and precise. As she slashes and sculpts her way across the surface of the canvas using only a palette knife, the pictures created are stunning examples of hyperrealism. She retains, however, the spirit of an impressionist; her output occurs in series, devoting specific attention to a landscape feature, examining its visual phenomena and manipulating colour and tone to develop a range of atmospheric effects.

The subject of waves is well suited to repetition in this sequence of works. Crashing in endless succession, ocean waves are a zen motif analogous to thoughts appearing and disappearing in the mind, or the rise and fall of the breath. Carving out the waves with sensuous precision, Toliusis establishes her own rhythm in concert with the pulsating tide of our planet inhaling and exhaling. This focus delves into a form of meditative abstraction – the same section of ocean forever producing an infinite number of images. In this sense, Toliusis consecrates a moment of time with each work, finding aesthetic significance in the arbitrary patterns invented by the peaks and rolls of the water.

Erika has had over 30 solo exhibitions internationally including Canada, the United States, Uruguay, Argentina, Dominican Republic, Paris, Amsterdam and Berlin. Her works are included in corporate and private collections in the United States, Canada, France, Germany, the Netherlands and Hong Kong.