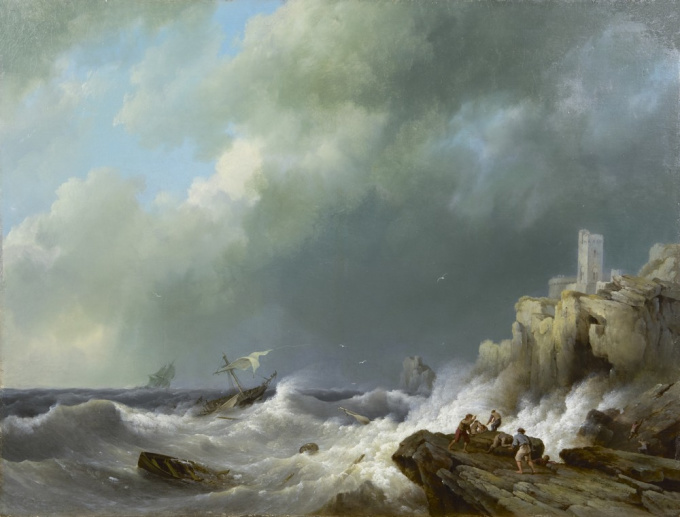 Shipwreck near a rocky coast 1834

Hermanus Koekkoek was the youngest son and a pupil of the marine painter Johannes Hermanus Koekkoek, forebear of the Koekkoek family of painters. Born in Middelburg, he subsequently lived in the Zuider Zee village of Durgerdam until moving to Amsterdam in 1833. During his fifty-year career, Koekkoek enjoyed great success as a painter of seascapes, beach and river scenes. His father's influence is evident in his detailed depiction of ships and their rigging, masterful illustration of water and animated narrative embellishments. As well as his own sons, Hermanus Koekkoek also taught the marine painter Willem Gruyter the Younger.

Hermanus Koekkoek was born on March 13th, 1815 in the Dutch city of Middelburg, located in the province Zeeland. He was the younger brother of the well-known landscape painter B.C. Koekkoek. His father Johannes Hermanus Koekkoek introduced him to the arts and gave him his first painting lessons. Until 1831 Hermanus lived and worked in Durgerdam, after which he moved to Amsterdam. Here he stayed until 1882, when he moved to Haarlem. He passed away in that city in the same year.
Hermanus Koekkoek is known as a marine painter. He often painted sea and river views in a typical Dutch Romantic style, and many influences of the Dutch marinepainters from the Golden Age are to be found in his work. Besides his waterviews, he left us a few landscapes by his hand. Hermanus Koekkoek taught the seascapist Willem Gruyter Jr., as well as his own sons, following the Koekkoek painterly tradition.

In 1840 Hermanus became a member of the Royal Academy in Amsterdam and in 1841 he was subscribed to the ‘Rotterdams Genootschap.’ During his lifetime he received much recognition for his work. In 1875 he won a gold medal at an exhibition at Arti et Amicitia, a renowned artist’s society in Amsterdam.