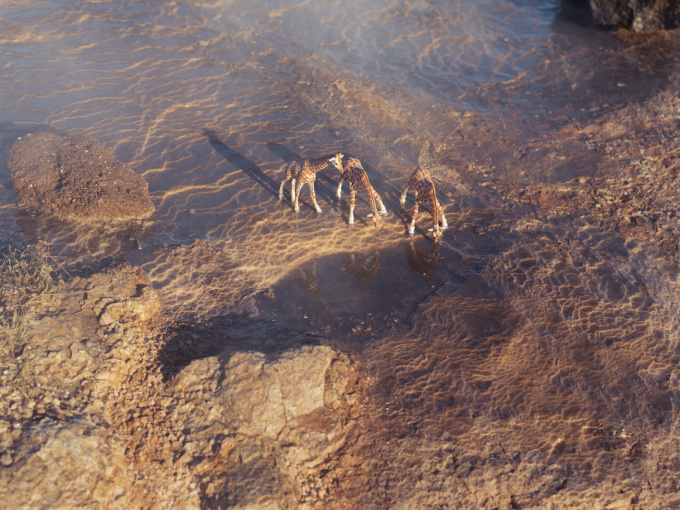 "Climate change, poaching and the destruction of natural habitat for commercial ends are the principal drivers behind the near- extinction of many animal species. According to the IUCN there are over 22,000 species on the Red List with a status ranging from vulnerable to critically endangered. Global action is essential to help these species survive.

The New Habitat series is about relocating endangered animals to safer grounds.

My Endangered project focused on immortalizing endangered species in ice. New Habitat is taking it a step further, by providing a new and safe environment
in which the animals can thrive once more.
Hopefully New Habitat will serve as an inspiration to protect and take care of nature."

Erik Hijweege is a Dutch contemporary photographer who was born in 1963. In 1998 he decided to become a photographer. He went to the Academy of Photography in Amsterdam. Since then he has been producing personal work and commissioned work. In 2004 he published Noir, a book of photographs about the lives of the African SAN and albinos. His book Holland contained beautiful photographs of the Netherlands and was published in 2012. Since 2013 Hijweege started experimenting with the wet plate collodion process, a photographic technique dating from the 19th century. In October 2014 he published "een eigen gezicht”, his first book of collodion photographs. His latest project “Sublime Nature” concentrates on the beauty of Nature’s forces and man’s vulnerability. In this project thundering waterfalls, rotating storms and strangling trees are captured on camera. Hijweege has had various solo exhibitions in the Netherlands and abroad including, Eduard Planting Gallery (2016, Amsterdam, The Netherlands), Fotofestival Naarden (2015, Naarden, The Netherlands), Witzenhausen Gallery (2012, Milk Gallery, New York, USA).