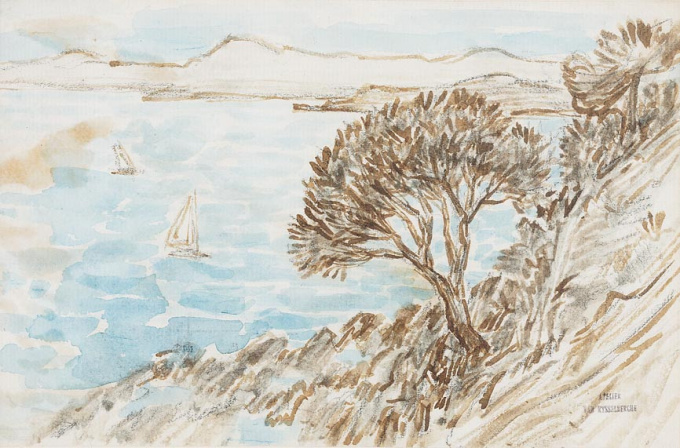 Théophile (Théo) van Rysselberghe was a Belgian neo-impressionist painter, who played a pivotal role in the European art scene at the turn of the century. He was born in Ghent in a French speaking bourgeoisie family in the Flemish part of Belgium.
Flemish artist Théo van Rysselberghe (1862-1926) is one of the most important figures in the field of Neo-impressionism. He introduced the Pointillist technique of Seurat and Signac in Belgium and played a major role in the group of avant-garde Brussels artists known as "Les XX" (Les Vingt).
Théo was born in Ghent and trained at the town’s academy, first exhibiting his work (two portraits) at the age of eighteen. He then went on to study at the academy in Brussels. In the early years of his career, his palette was influenced by a close study of the work of Frans Hals in Haarlem and by his first visit to Morocco: his work began to feature loose brushstrokes, warm colours and exotic scenes bathed in brilliant sunlight. Rysselberghe was a born traveller: all his life he would continue to feel the pull of distant lands. He spent a year in Morocco, visited Constantinople (Istanbul), roamed Europe and made repeated trips to the Netherlands. Like his future colleagues in Les Vingt, however, he was also particularly attached to the Belgian coastal resort of Knokke. During this early period he came into contact with the American painter Whistler. Les Vingt was established in 1883 and in 1887 the members organised a major exhibition of Neo-Impressionists. That was where Rysselberghe met Signac and the two became friends. Rysselberghe had already discovered Seurat’s work the previous year in Paris and at the time of the exhibition he himself was beginning to experiment with Impressionist technique and the decomposition of light and colour, adopting a bright and luminous palette as a result. He exhibited in Paris at the Salon des Indépendants, launched by Seurat, Signac and Cross. He had close ties with the Pointillists: he travelled with Signac by boat to the South of France, visited Pissarro in Paris, worked in Sigac’s studio in the city and was later to join Signac for a time in St. Tropez. After 1898, however, he distanced himself from Signac, wanting to concentrate more on nature and move away from Neo-Impressionism. He sought his subjects in Brittany and on the coast of England and his brushwork and compositions became freer. Rysselberghe was in close contact with many contemporary Belgian and French artists and writers, as witness his portraits of André Gide, Paul Signac and Octave Maus, the secretary of Les Vingt.