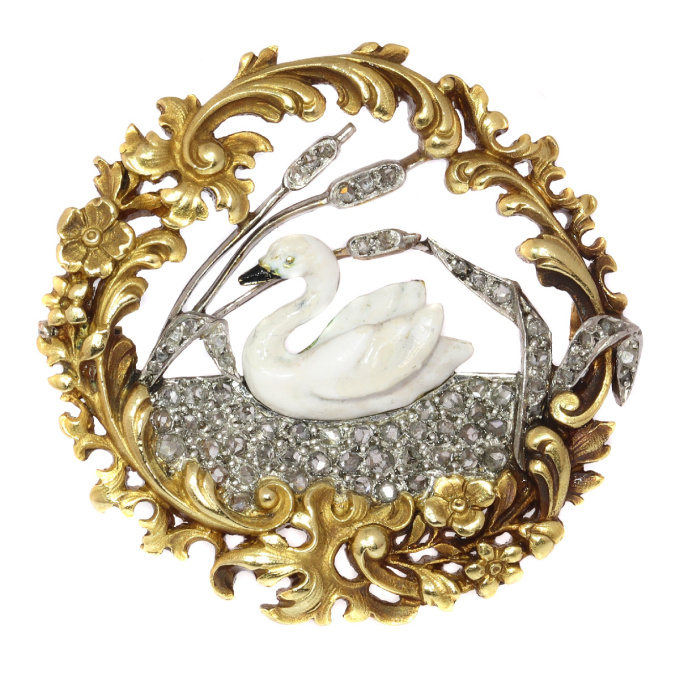 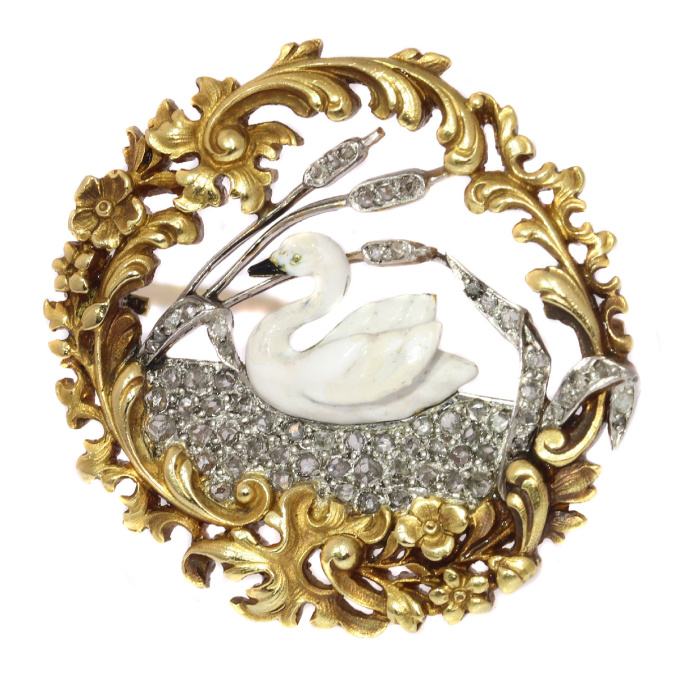 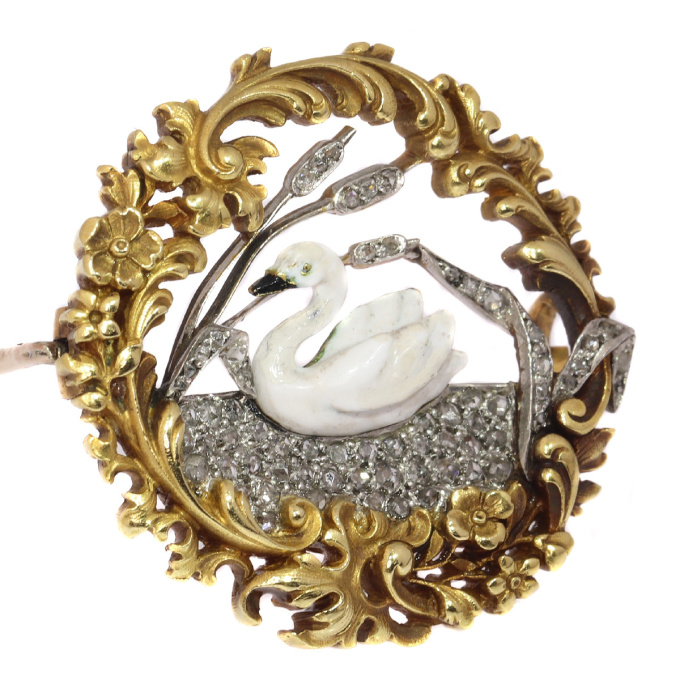 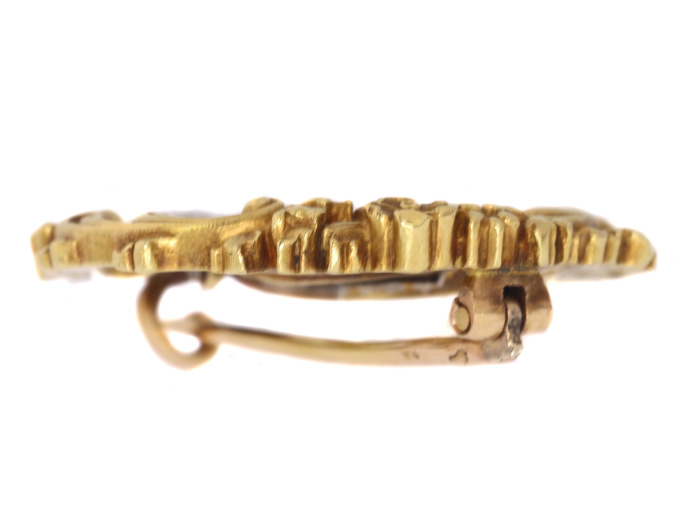 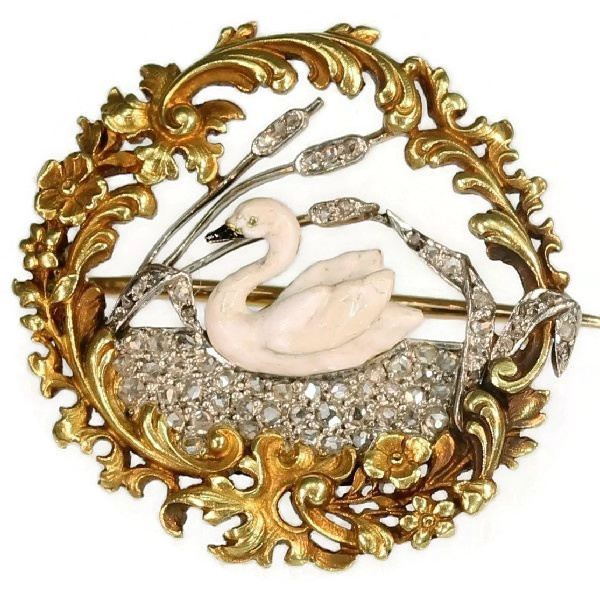 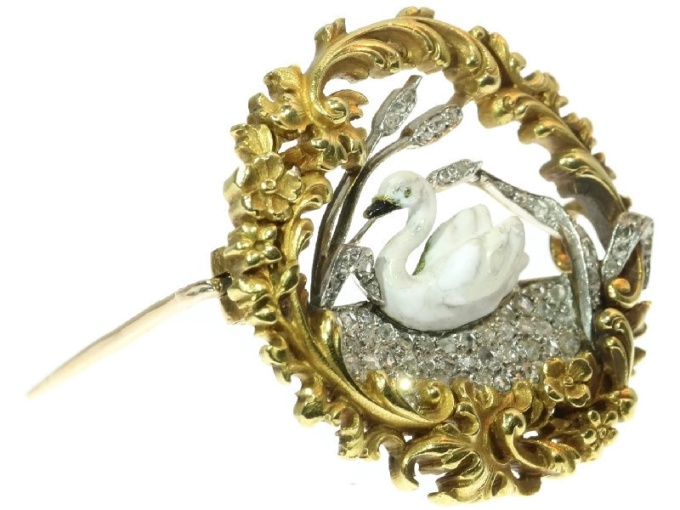 Envision this French Victorian 18K yellow gold brooch with a white enamelled balletic swan resting between the reedmace of a shimmering lake full of silver-encrusted rose cut diamonds as the miniature scenery through the hedge window of your garden.Emanating tranquility and peace, not one soul would ever feel like an ugly duckling wearing this intricate representation of applied art.

Style: Between Victorian and Art Nouveau - Victorian decorative arts refers to the style of decorative arts during theVictorian era. The Victorian era is known for its eclectic revival and interpretation of historic styles and the introduction of cross-cultural influencesfrom the middle east and Asia in furniture, fittings, and Interior decoration. Victorian design is widely viewed as having indulged in a regrettable excess ofornament.

The Arts and Crafts movement, the aesthetic movement, Anglo-Japanese style, and Art Nouveau style have their beginnings in the lateVictorian era. Art Nouveau (French for New Style) is an international movement and style of art, architecture and applied ar - especially the decorativearts - that peaked in popularity at the turn of the 20th century (1890–1905).

The name "Art Nouveau" is French for "new art". It is also known as"Jugendstil", German for "youth style", named after the magazine Jugend, which promoted it, and in Italy, Stile Liberty from the department store in London,Liberty & Co., which popularised the style. A reaction to academic art of the 19th century, it is characterized by organic, especially floral and otherplant-inspired motifs, as well as highly stylized, flowing curvilinear forms.

Art Nouveau is an approach to design according to which artists should work on everything from architecture to furniture, making art part of everyday life.
See also: late-Victorian, early Art Nouveau, eclecticismor more info on styles

The jewelry of the late Victorian period once again returned to romanticism with more delicate and whimsical motifs such as stars, crescent moons, reptilesand insects. The discovery of the diamond mines in South Africa led to the use of mine, rose and cushion cut diamond stones.

Theme (01): Swans - Swans in Western in culture:
Many of the cultural aspects refer to the Mute Swan of Europe. Perhaps the best known story about a swan is The Ugly Duckling fable. Swans are often a symbol of love or fidelity because of their long-lasting monogamous relationships. See the famousswan-related operas Lohengrin and Parsifal.

Swans feature strongly in mythology. In Greek mythology, the story of Leda and the Swan recounts that Helen of Troy was conceived in a union of Zeus disguised as a swan and Leda, Queen of Sparta. Other references in classical literature include thebelief that upon death the otherwise silent Mute Swan would sing beautifully - hence the phrase swan song. (from: Wikipedia)

Theme (02): Reedmace (or Cattail) Flower Symbolism - The flower symbolism associated with the reedmace or cattail is peace and prosperity.

Material: 18K yellow gold except for the face of the brooch that is set with the rose cut diamonds, that is in silver (see also the explanation on silver on gold).
(more info on precious metals)

Technique: Enamelling is an old and widely-adopted technology. The ancient Egyptians applied enamels to pottery and stone objects. The ancient Greeks, Celts, Russians, and Chinese also used enameling processes on metal objects. Enamel is the colorful result offusing powdered glass to a substrate by firing, usually between 750 and 850 degrees Celsius. The powder melts and flows and hardens to a smooth, durable vitreous coating on metal, glass or ceramic. According to some sources, the word enamel comes fromthe High German word smelzan (to smelt) via the Old French esmail. Used as a noun, "an enamel" is a usually small decorative object, coated with enamel coating, such as a champlevé or a cloisonné (different techniques).

Diamonds:66 rose cut diamonds. We do not have the weight of the diamonds which is normal in our trade when it comes to rose cuts.
Note: All diamond weights, color grades and clarity are approximate since the stones were not removed from their mounts to preserve the integrity of the setting.

Birthstones: Diamond is the birthstone (or month stone) for April.
(more info on birthstones)

Hallmarks: The French control mark for 18K gold representing an eagle's head that was in use in France from about 1838.
(more info on hallmarks)