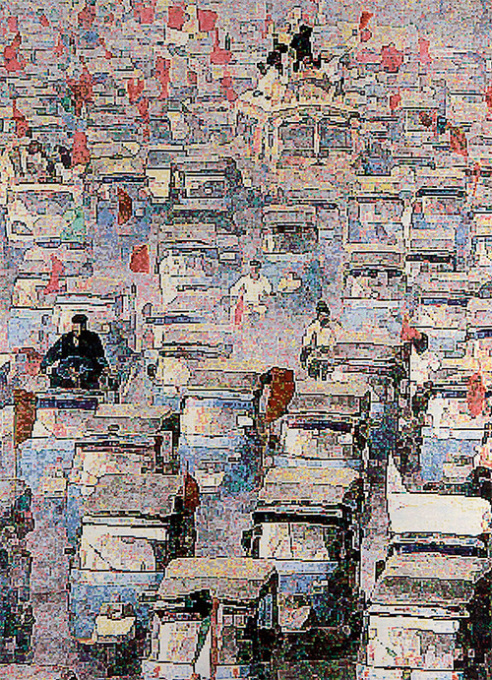 Barbara Broekman studied at the Rietveld Academy from 1978 till 1982, initially in the Fashion Department and then in the course for Monumental Textiles. Her most influential teachers were Margot Rolf and Herman Scholten. Margot Rolf is someone with her feet planted firmly in the rationalist design approach of the Bauhaus. In this method beauty is not a decorative addition, but is guided by an aesthetics based in the choice of materials and techniques. The pattern of a fabric is livened by the alternation in the colour and texture of the threads, without this encroaching on the structure of warp and weft. Van Rolf taught Barbara Broekman to design in a structured and analytical fashion. Herman Scholten has strong affinities with conceptual art and the minimalism of the Dutch Nul movement. He instilled Barbara Broekman with a formal and objective approach to design. Both influences were decisive for her approach to art.

While her style has developed in another direction, her formal approach to image and her analytical exploration of the composition can be referred back to her period at the Rietveld.
In her early designs the formal legacy of the Bauhaus can still be discerned. It can be seen in a work she made in her years at art school and which she still made by hand, a piece of embroidery from 1981. Strips of colour run through and over each other, while maintaining the organized structure of the textile. In this initial stage of her work Broekman investigated all the possibilities of this structural working method.
While she was still absorbed in these formal variations in structure, her curiosity was already seeking a freer approach and new stimuli, which she found in America. For her apprenticeship year for the Rietveld, Broekman looked for a placement in New York or San Francisco, which at that time were world leaders in textile courses. San Francisco took her on. In 1980-81 Broekman studied for a year at the California College of the Arts in Berkeley. Her senior lecturer there was the artist Lia Cook. Through her Broekman came in contact with the free approach to divergent cultural and historical traditions that she has appropriated and assimilated with ease in her own work. Furthermore the hierarchical distinction between the free arts and the applied arts (or rather, the notion of art divided into categories according to materials and technique) was not an issue here. In short, it was a mentality that closely related to the emerging postmodernist movement in Europe and it was a relief for Broekman with her sensitive and intuitive creative personality to be able to draw from both sources at will.
Besides Cook, the American artist Sheila Hicks was an important source of inspiration in those years. Broekman: ‘With the enormous sizes of her works, Hicks freed textiles from their context. She rescued the discipline from the feminine realm and from its everyday normality.’ She was also drawn to Hicks’s business attitude and her studio with a host of people working for her.
Broekman’s work expanded, partly under the influence of the American stimuli, into increasingly complicated compositions and larger formats in which she also looked for a three-dimensional stratified quality. She began to include visual elements from art history and from other cultures and she started working with photographic imagery. The well-ordered working method she had been instilled with in Amsterdam became a fundamental technique, a method.