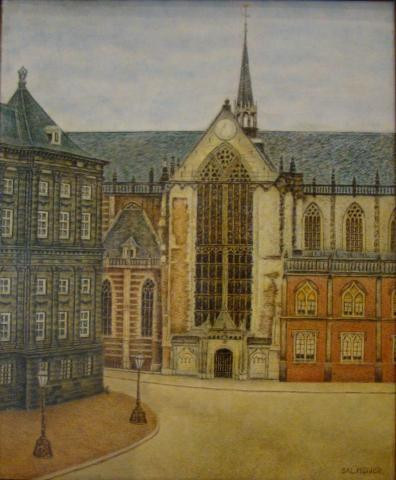 Salomon ‘Sal’ Meijer was a Dutch painter, primarily known for his paintings of cats and Amsterdam city views. He was the son of Jewish diamond-cutters but his marriage to the non-Jewish Liesje Giehl caused so much friction that he moved out of his parents’ home and moved to Blaricum, which has a vibrant artists’ community. During the World War II, he was forbidden to exhibit his paintings but his mixed marriage enabled him to survive the war. Due to the simplicity of his painting and his modest attitude, his work was often labelled as naïve and primitive. However, a revaluation of his work started in 1957, when the article ‘Our greatest modern primitive- painter of importance’ was published about Meijer. In 1986, the book ‘Sal Meijer, not that naïve’ was published, and in 1990 the book ‘Sal Meijer: Raphael of cats’.