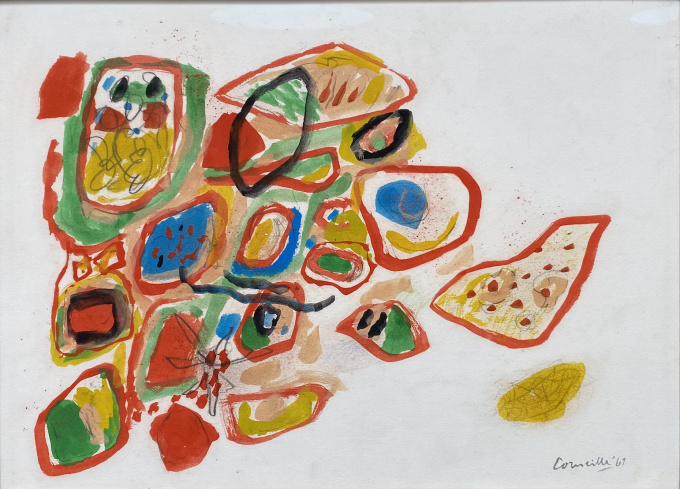 Corneille, also known as Corneille Guillaume Beverloo, was a painter and graphic artist who radicalized the conservative Dutch art world in the early 1950s. He founded CoBrA in 1949, a post-war Expressionist European movement, along with five other influential artists that included Karel Appel and Constant. Born to Dutch parents in Liege, Belgium on July 3, 1922, Corneille went on to study art at the Academy of Art in Amsterdam in 1940, but is generally considered a self-trained painter. His approach is often described as imaginative and poetic, and is characterized by an eccentric use of color and his placing of familiar subjects, such as cats, birds, and women, in mythological or juvenile settings. “I am a painter of joy,” the artist declared at his 2007 exhibit at the Cobra Museum. He was notably influenced by African art, which he collected during his time traveling throughout the continent during the 1950s. His work was also affected by Pablo Picasso and Paul Klee, and, most notably, Vincent van Gogh’s use of color and form. His works are featured in collections at the Cobra Museum of Modern Art in the Netherlands, the Fine Arts Museums of San Francisco, and the Museum of Fine Arts in Boston. He died on September 5, 2010 in Paris, France.

Guillaume Cornelis van Beverloo was born on July 3, 1922 in Liege, Belgium. He is better known under his pseudonym Corneille and is a Dutch artist.

Although mostly self-taught, Corneille studied art at the Academy of Art in Amsterdam, in the Netherlands. He was one of the founders of the Experimentele Groep Holland in 1948 and in 1949 he was also one of the founders of the COBRA group, together with Karel Appel, Jan Nieuwenhuijs, his brother Constant Nieuwenhuijs and the Belgians Christian Dotremont and Joseph Noiret.

Cornielle was active within the group from the beginning, not only painting but also publishing poetry in the Cobra magazine. The poetic Corneille was strongly influenced by Miro, Klee and Picasso. After the group dissolved in 1951 he moved to Paris and began collecting African art. These primitive artifacts became evident in his works, which began to take on a more imaginative style, like landscapes seen from a bird's eye view, exotic birds and stylised forms. He lived together with the Dutch photographer Henny Riemens (1928-1993).

From the 1960s his work became more and more influenced by his African art and this lead to Corneille developing a more figurative style where women, birds, flowers and figures played a significant role. Corneille believed painting was not a job or hobby but a call.

Corneille died on September 5, 2010 at the age of 88 in France, where he lived and worked. He had lived in the Maison d’Oise in Val d’Oise for the last years of his live. Corneille was buried at the graveyard of Auvers-sur-Oise, where in 1890 Vincent van Gogh was also buried.