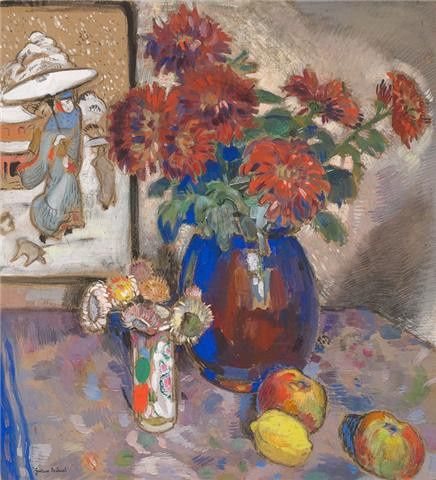 Gustave de Smet is a Flemish artist from Ghent. Together with Frits Van den Berghe and Constant Permeke he is one of the founders of the Flemish expressionism. After World War II he formed the second artist group of the Latemse School in Sint-Martens-Latem. Léon de Smet, his brother is also a well known artist, they both started working at their fathers atelier. Together they became pupils at the Royal Academy of Fine Arts in Ghent. His brother Léon de Smet was an outstanding pupil, while Gustave was indifferent. The style of the two brothers are opposites, where Léon has a more impressionistic style, Gustave creates more expressionistic work. When World War II started he and his wife, Gusta van Hoornbeke, fled to the Netherlands where he lived until the war was over.

His early work has a lot of cubist elements, this changed when he met the French Expressionist painter Henri Le Fauconnier. The subjects of his paintings are mostly still lives, portraits and genre paintings.

He lived in several places in Belgium and got in touch with a lot of artists, such as André de Ridder and Paul-Gustave van Hecke. After his death in 1943 his house became a local museum in Deurne