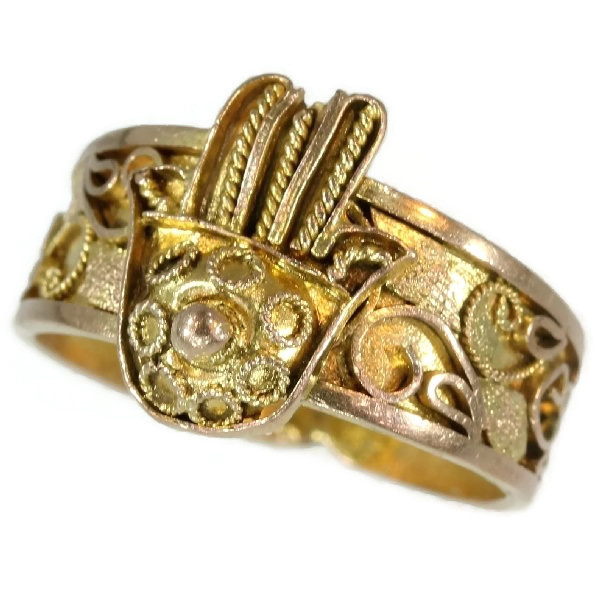 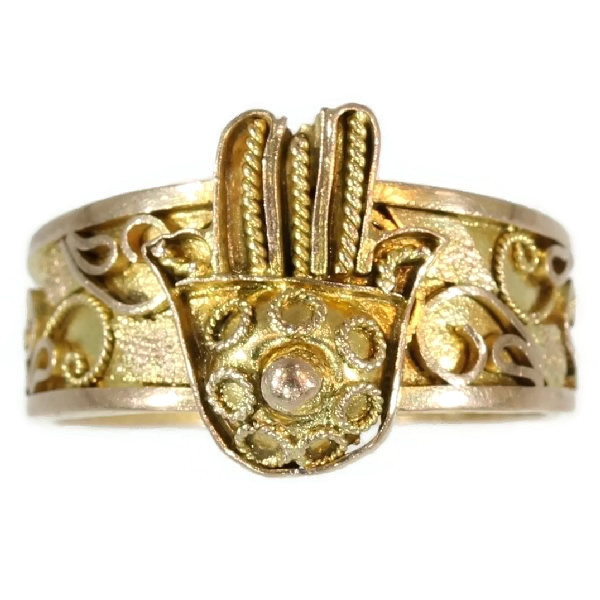 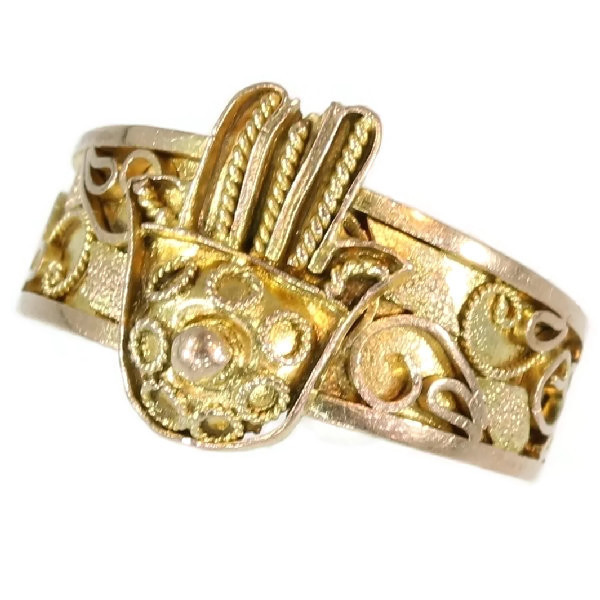 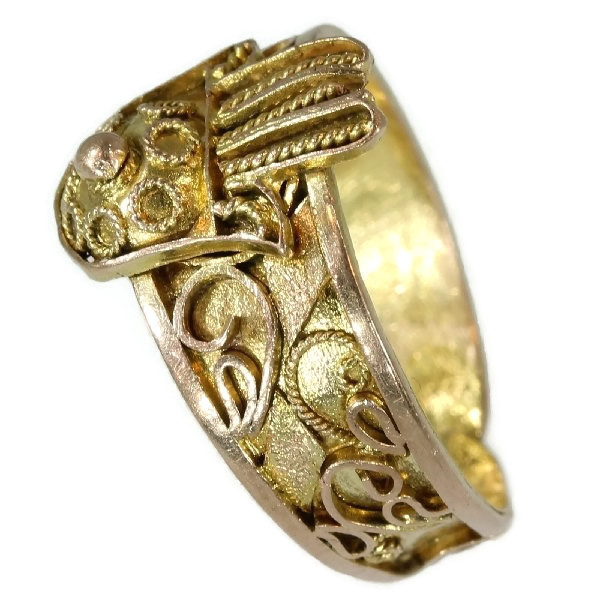 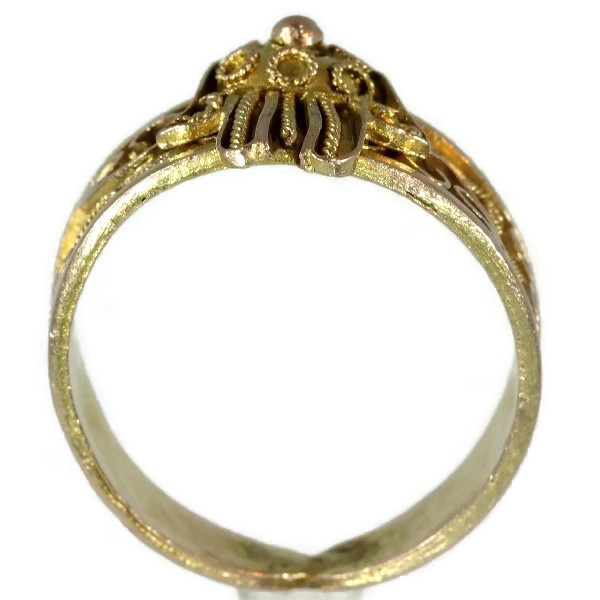 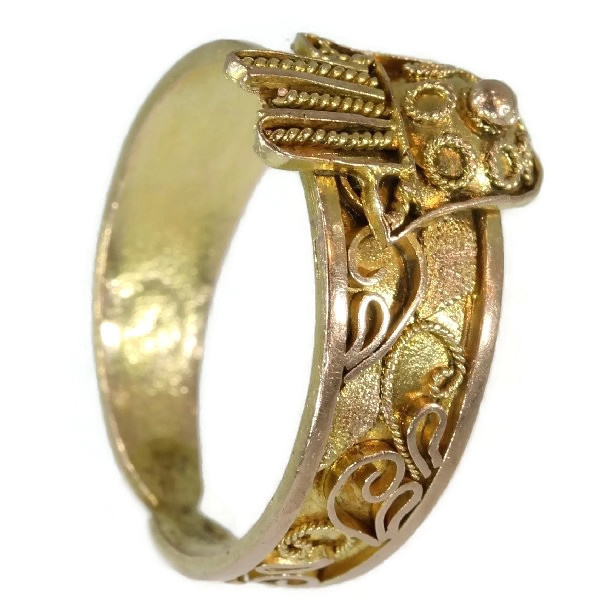 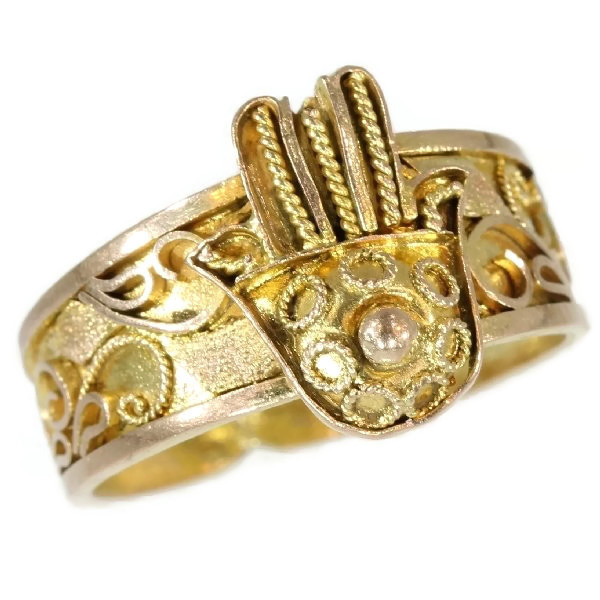 This 18K red gold French ring from 1810 holds the hand of Fatima with a domed palm and filigree adornments. With such a meticulously embellished shank with filigree frills and leaflets, this jewel in Empire style offers you the opportunity to wear thehamsa -referring to the five digits of the hand- for protection on your own hand and to always be safe and well.

Condition: good condition considering its age of 200 years (top of middle finger is missing - but very hard to see)
-  (more info on our condition scale)

Style: Empire - The Empire style, sometimes considered the second phase of Neoclassicism, is an early-19th-century design movement in architecture, furniture, other decorative arts, and the visual arts followed in Europe and America up to around 1830. Thestyle originated in and takes its name from the period when Napoleon I ruled France, known as the First French Empire, where it was intended to idealize Napoleon's leadership and the French state. The style corresponds to the Biedermeier style in theGerman-speaking lands, Federal style in the United States and to the Regency style in Britain. An earlier phase of the style was called the Adam style in Great Britain and "Louis Seize" or Louis XVI, in France.
-  See also: Empireor more info on styles

Style specifics: A style that borrowed style specifics from the ancient Greeks and the Roman empire (hence the name of the style: Empire). The empire period represents the second part of the Neo-Classical style, and shows a strong French influence. The style originatedin the desire of Napoleon to revive the luxurious majesty of imperial Rome. Traditional classical motifs, already seen in the reign of Louis XVI, were supplemented by symbols of imperial grandeur- the emperor's monogram and his emblem, the bee;representations of military trophies; and after the successful campaigns in Egypt, Egyptian motifs. If we had to characterize this style briefly, we could focus on two elementary concepts: massiveness and symmetry.

Theme: The hand of Fatima - The hand of Fatima or The Khamsa (Arabic: khamsah also romanized khamsa, meaning lit. "five") is a palm-shaped amulet popular throughout the Middle East and North Africa, and commonly used in jewellery and wall hangings. Depictingthe open right hand, an image recognized and used as a sign of protection in many societies throughout history, the hamsa is believed to provide defense against the evil eye.

Early use of the hamsa has been traced to ancient Mesopotamia (modern-day Iraq). Other symbols of divine protection based around the hand include the Hand-of-Venus (or Aphrodite), the Hand-of-Mary, that was used to protect women from the evil eye, boostfertility and lactation, promote healthy pregnancies and strengthen the weak, and in the Buddha's gesture (mudra) of teaching and protection.[2] In that time, women were under immense pressure and expectation to become mothers. The women’s upbringing was centered on becoming a mother as an exclusive role, and it indicated child bearing as necessary. In addition, it was also thought marriage was a sense of protection for both the man and woman.

The hamsa's path into Jewish culture, and its popularity particularly in Sephardic and Mizrahi Jewish communities, can be traced through its use in Islam. Many Jews believe that the five fingers of the hamsa hand remind its wearer to use their fivesenses to praise God. This "favorite Muslim talisman" became a part of Jewish tradition in North African and Middle Eastern Muslim countries. The symbol of the hand appears in Kabbalistic manuscripts and amulets, doubling as the Hebrew letter "Shin", the first letter of "Shaddai", one of the names referring to God.

The khamsa holds recognition as a bearer of good fortune among Christians in the region as well. Levantine Christians call it the hand of Mary (Arabic: Kef Miryam, or the "Virgin Mary's Hand"). Well after the end of Islamic rule in Spain, its use wassignificant enough to prompt an episcopal committee convened by Emperor Charles V to decree a ban on the Hand of Fatima and all open right hand amulets in 1526. (From: Wikipedia)

Technique: Filigree (formerly written filigrann or filigrane) is a delicate kind of jewel work made with twisted threads usually of gold and silver or stitching of the same curving motifs. It often suggests lace and French from 1660 to the late 19th century. Itshould not be confused with ajoure jewellery work; while both have many open areas, filigree involves threads being soldered together to form an object and ajoure involves holes being punched, drilled, or cut through an existing piece of metal. (from: Wikipedia)

Hallmarks: The French hallmark depicting a rooster's head which was used in France for 18K gold around 1810.
-  (more info on hallmarks)

Resizing: This ring cannot be made smaller because of the way it is made. It can be made bigger by bending it open.
-  (more info on ring sizes)