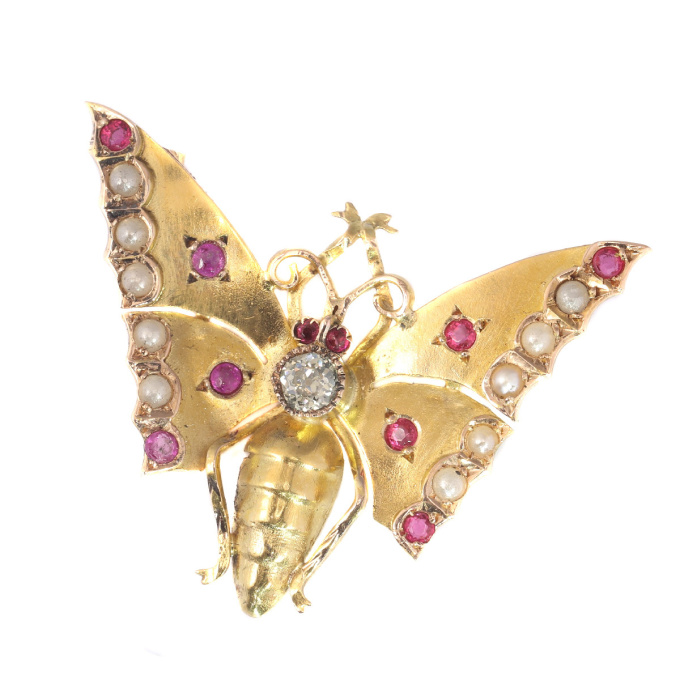 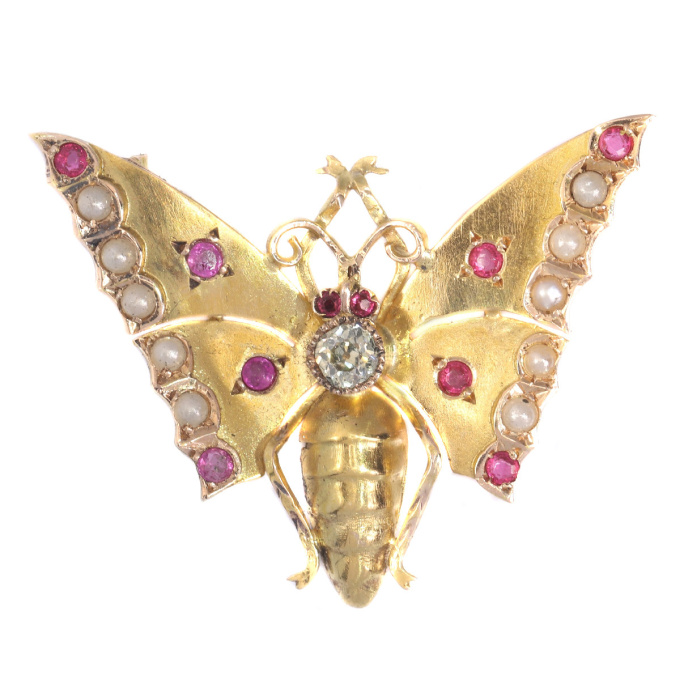 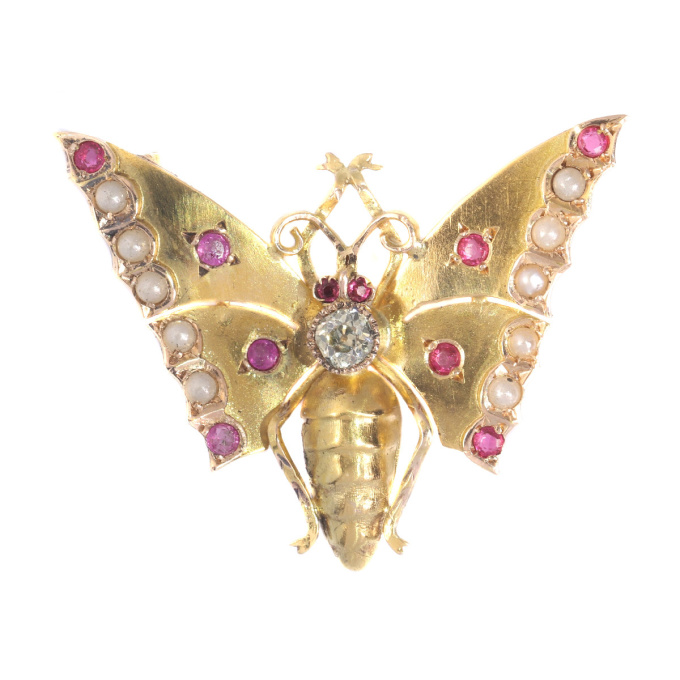 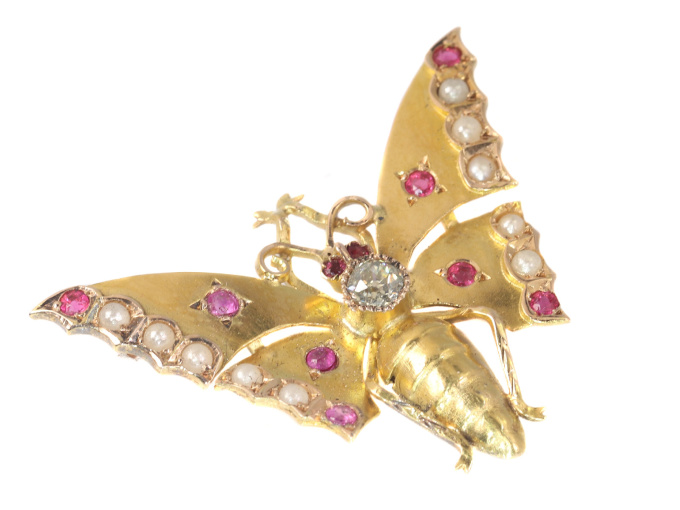 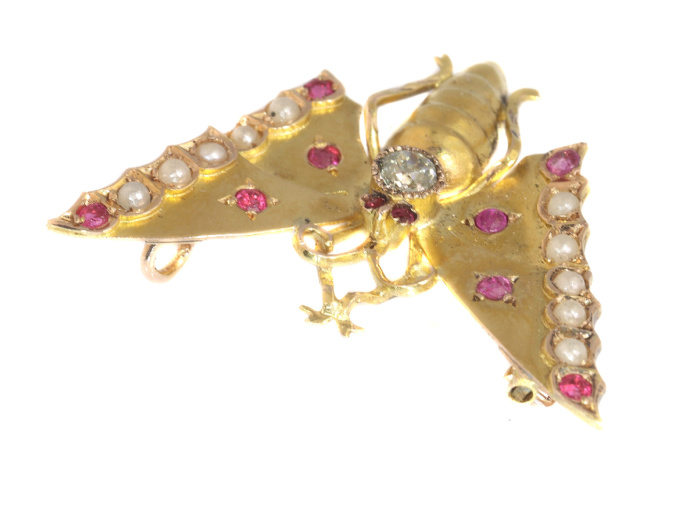 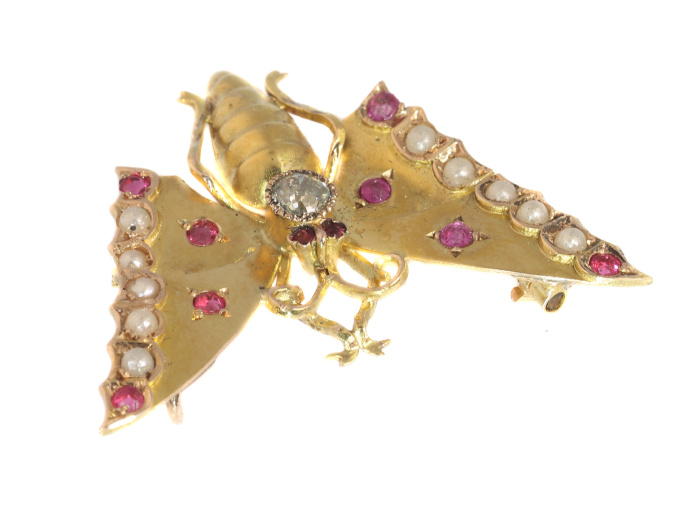 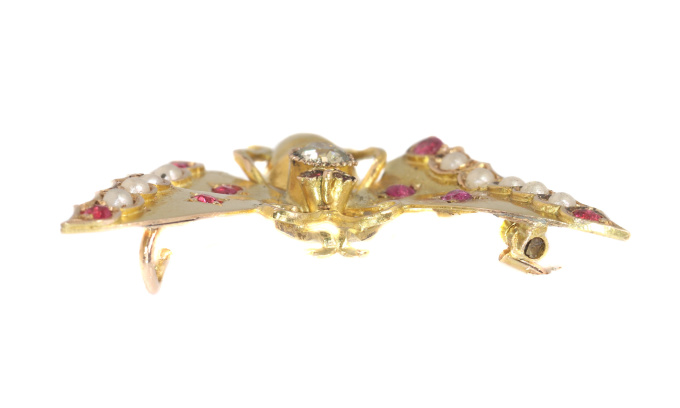 Style: Victorian - Victorian decorative arts refers to the style of decorative arts during the Victorian era. The Victorian era is known for its eclectic revival and interpretation of historic styles and the introduction of cross-cultural influences from the middle east and Asia in furniture, fittings, and Interior decoration. Victorian design is widely viewed as having indulged in a regrettable excess of ornament. The Arts and Crafts movement, the aesthetic movement, Anglo-Japanese style, and Art Nouveau style have their beginnings in the late Victorian era.
-  See also: Victorianor more info on styles

Extra information: Butterfly - Artistic depictions of butterflies have been used in many cultures including Egyptian hieroglyphs 3500 years ago. In the ancient Mesoamerican city of Teotihuacan, the brilliantly colored image of the butterfly was carved into many temples, buildings, jewelry, and emblazoned on incense burners in particular. Today, butterflies are widely used in various objects of art and jewelry: mounted in frames, embedded in resin, displayed in bottles, laminated in paper, and used in some mixed media artworks and furnishings.
Butterfly symbolism - A butterfly was seen in Japan as the personification of a person's soul; whether they be living, dying, or already dead. One Japanese superstition says that if a butterfly enters your guestroom and perches behind the bamboo screen, the person whom you most love is coming to see you. The Russian word for "butterfly", bábochka, also means "bow tie". It is a diminutive of "baba" or "babka" (= "woman, grandmother, cake"), whence also "babushka" = "grandmother". The ancient Greek word for "butterfly" is psyche, which primarily means "soul" or "mind". According to Mircea Eliade's Encyclopedia of Religion, some of the Nagas of Manipur trace their ancestry from a butterfly. In Chinese culture, two butterflies flying together symbolize love. Also, Butterfly Lovers is a famous Chinese folktale. In some old cultures, butterflies also symbolize rebirth after being inside a cocoon for a period of time. Some people say that when a butterfly lands on you it means good luck. The idiom "butterflies in the stomach" is used to describe a state of nervousness. (From Wikipedia) Cartier - A leading French jewelry firm, founded in 1847 by Louis-Francois Cartier (1819-1904).

A group headed by Robert Hocq (1917-79)acquired from the Cartier family the branches in Paris (1972), London (1974), and New York (1976). Hocq was Managing Director until his death when he was succeeded by his daughter, Nathalie (b. 1951),who since 1974 had headed the high-fashion jewelry department and promoted the boutique collection of jewelry known as Les Musts'.

Originally the firm made jewelry of enameled gold set with gemstones, which attracted a prestigious clientele, including French royalty and the future Edward VII;in recent years it has greatly expanded into new types and styles of jewelry, and is extending its world-wide operations.

Diamond(s): One old European cut diamondwith an estimated weight of ± 0.17ct. (colour and clarity: K/M, i).

- All diamond weights, color grades and clarity are approximate since stones are not removed from their mounts topreserve the integrity of the setting. Also we have all diamonds screened by the IJGC - lab (www.ijgc-worldwide.com)for whether they are natural or synthetic, and all diamonds in this jewel are 100% guaranteed to be natural!

- All color stone weights are approximate since stones are not removed from their mounts to preserve the integrity of the setting.

Birthstones: Diamond is the birthstone (or month stone) for April, ruby for July and pearl for June.
-  (more info on birthstones)