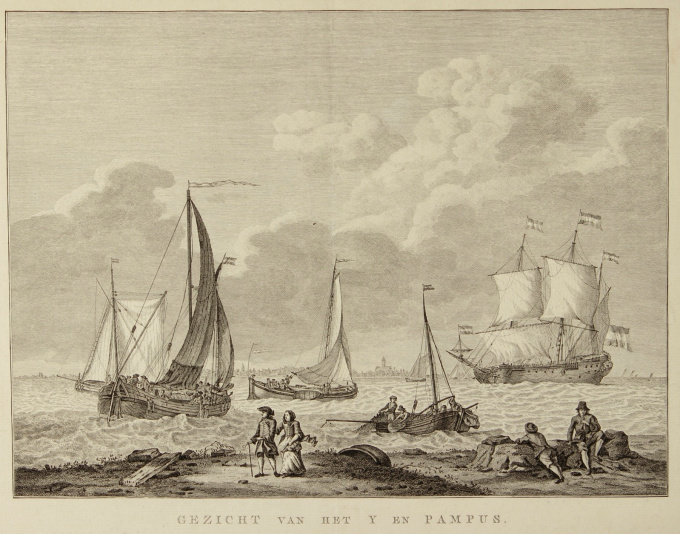 Beautiful view of the IJ and Pampus, the trench deepened by sludge located at the mouth of the IJ east of Amsterdam and north of Muiden. (So ​not to be confused with the 19th-century fortress island of Pampus.)

At the time of the VOC, the ships, heavily loaded by merchandise from the East, could not easily pass through the shallow channel when they were almost home. Often people had to wait for the flood to reach the port of Amsterdam.

After docking, sailors got their gage and often wasted on alcohol and women in the following days. Then they went home, just as destitute as they were before the journey. Sailors often came from the province. When recruiters of the VOC arrived in the villages again, the mothers of the future sailors said: "Do not do that, that does not matter." That discouragement was bad for the trade, because if there were no sailors, then the ships could not be manned.

The Lords of the VOC then came up with a trick. When the ships faced Pampus' speech, they received water, food and soap. Then a brothel was rented. The ladies of the brothel were brought on board together with a substantial amount of drink. After three days, the creatures were totally reeling and exhausted. Then the ship went to the harbour, moored, the sailors got their pay and went home. Now they went home with money and with tough stories. This made it easier to recruit sailors. The term "lying in front of pampus" in the sense of being drunk comes from the use described here.

Matthias de Sallieth was born in Prague. He moved to the Northern Netherlands and died in Rotterdam in 1791.
His profession was engraver.
He started as a plate worker for J.E Mansfeld in Vienna. Afterwards he moved to Paris, where he worked for J.P. Le Bas.
In 1778 he moved to Holland and installed himself at Schoonderloo, near Delfshaven and Rotterdam. His last and not completed work, Nieuwpoort, was completed after his death and printed in Paris.