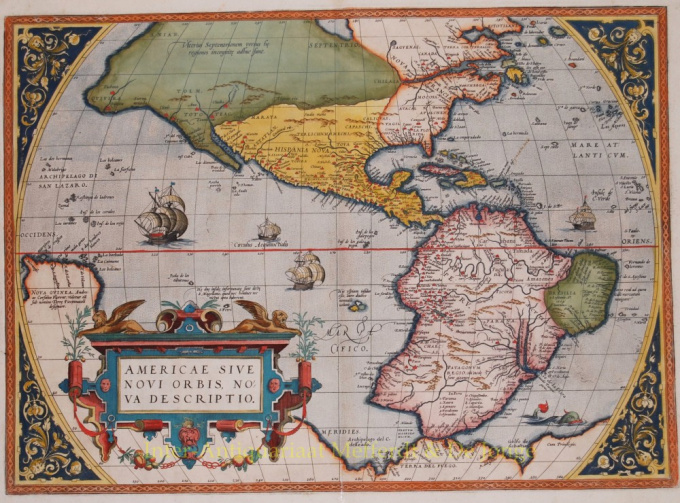 Americae Sive Novi Orbis, Nova Descriptio
According to Burden: “One of the most famous and esily recognised maps of America, and one that is both functional as well as decorative”.

An important map because of it’s influence on the European perceptions of America. When the map was first published by Abraham Ortelius at Antwerp in 1570, it was the best map of the Americas available. It was in fact the first of it’s kind to achieve wide circulation through an atlas. Lower California is correctly shown as a peninsula and America is separated from Asia in the northwest. A strategically placed cartouche hides the complete lack of the southern waters of the Pacific.

Abraham Ortelius was born in Antwerp in 1527.
He was famous cartographer and geographer from the south of the Netherlands.
Ortelius was the founder of the modern Atlas, and can be seen as one of the great Geographers of his time.
Ortelius' family originated from the German city Augsburg.
In1547 Ortelius performed as colorer of maps in the guild of Saint-Lucas in Antwerp.
He shortly lived in England and Liege after 1576 for political reasons.
After this he returned to Antwerp where he lived until he died in 1598