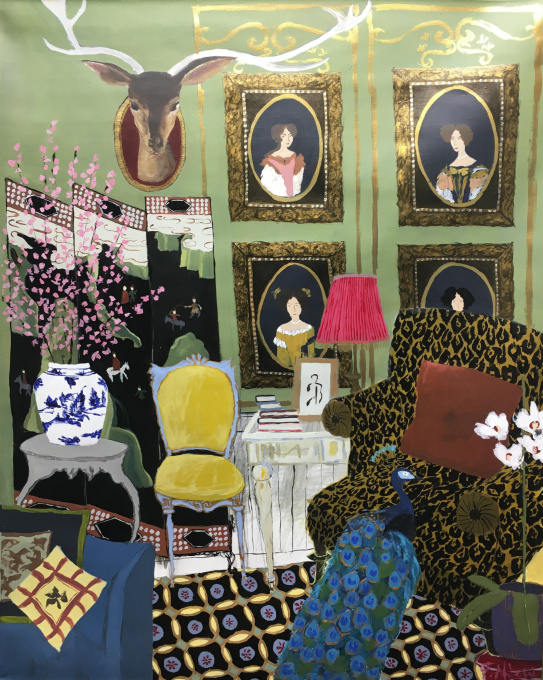 Nostalgia for seemingly better times, or perhaps, simultaneously, a secret yearning for worse times to come, are woven into Francisca Ahlers’s scenes, in a back and forth of strokes which fluidly depict time and fractured time. The main themes are the past, oblivion, solitude and waiting combined with a poetic method of recovering memory, using black and white with just a few segments of colour. The artist’s usual medium is charcoal, which she uses to give life to ancient, uninhabited rooms.
The scenes reflect the romance of times gone by, as well as the space’s descent from riches to rags. An excess of Baroque highlights the emptiness of exterior scenes, whilst the same feeling is created inside by the inhabitants, who usually appear as lost characters peering out, seeming to show the spectator around their habitat without realizing that they are actually part of its beautiful decadence.
The works are mainly composed of frayed lines, eloquently depicting the emotional state of people and elements, often morphing into swarms which symbolize the characters’ neurosis and the energy in the air. As such, the artist accentuates the feeling of anti-habitat emanated by her work, producing a curious and alluring effect: being faced with an apparently uninhabitable environment which, at the same time, seems welcoming, even familiar, awakening our curiosity for these timeless, exquisite and ghostly portraits.

Chilean artist Francisca Ahlers wants to transport you to a different time and place: the romance of time gone by seeps into her pieces and infuses them with an alluring nature. It’s easy to get lost in the detail of her works, which often depict vast rooms or spaces brimming with the decorative – rich patterns, textures and objects. It is not unusual to spy a peacock or a cat, chandeliers, expensive porcelain and extravagant rugs amongst luxuriant wallpaper and lavishly tiled floors. Ahlers uses the medium of charcoal, and, in some works, acrylic. The contrast of mediums and of colour with darkness only serves to heighten the ethereal quality that’s present. It is as if they are slowly fading into nothing, into the past. Remnants of the masters are prevalent within her spaces; Picasso and Vermeers, and also the whimsical illustrations of Quentin Blake, Ludwig Bemelmans and Lauren Child. But though inspiration is pulled from many corners, Ahlers works are, on the whole, something completely different. They are original and new, and refreshing to the eye.