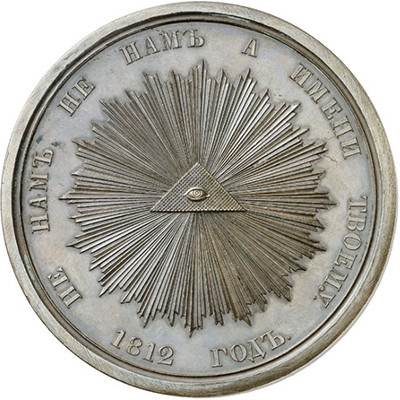 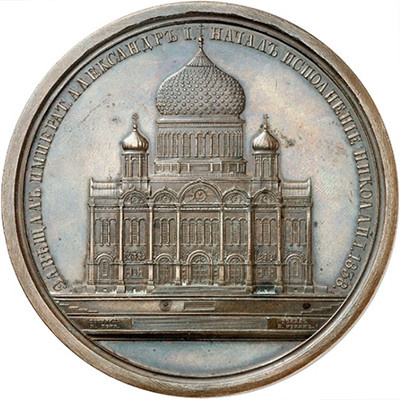 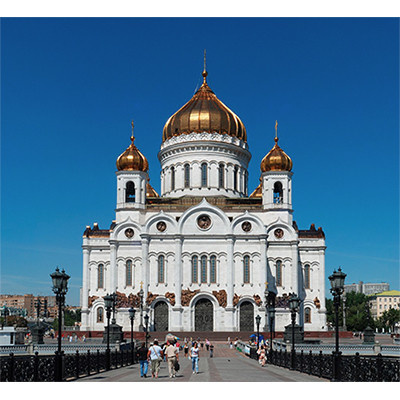 Obverse: Large radiant All-Seeing Eye, Cyrillic legend reading: Not for Us, Not for Us, But for the Sake of Thy Name, 1812

Reverse: view of the cathedral, signed at foundation by architect Konstantin Thon and engraver P. Utkin

When Napoleon Bonaparte retreated from Moscow, Tsar Alexander I signed a manifest on 25 December 1812 declaring his intention to build a cathedral in honor of Christ the Savior “to signify Our gratitude to Divine Providence for saving Russia from the doom that overshadowed Her” and as a memorial to the sacrifices of the Russian people. It took some time for work on the projected cathedral to get started. The first finished architectural project, by Aleksandr Lavrentyevich Vitberg, was endorsed by the Tsar in 1817. It was a flamboyant Neoclassical design full of Freemasonic symbolism. Construction work was begun on the Sparrow Hills, the highest point in Moscow, but the site proved unstable. In the meantime Alexander I was succeeded by his brother Nicholas I. Profoundly Orthodox and patriotic, the new Tsar disliked the Neoclassicism and Freemasonry of the design selected by his predecessor. He commissioned his favorite architect Konstantin Thon to create a new design, taking as his model Hagia Sophia in Constantinople, Turkey. Thon’s Russian Revival design was approved in 1832. A new site closer to the Moscow Kremlin was chosen by the Tsar in 1837. A convent and church on the site had to be relocated, so the cornerstone of the new church was not laid until 1839. The cathedral was destroyed in 1931 on the order of Soviet leader Joseph Stalin. Following the end of the Soviet Union, the current church was rebuilt on the site during 1995–2000.

Peter Savich Utkin (Petr Savvič Utkin or Пётр Саввич Уткин) was a Russian symbolistic painter. He was born in Tambov and followed his art school in Saratov. In 1897 he entered the Moscow School of Painting, Sculpture and Architecture till 1907. He studied with Isaac Levitan, Constantin Korovine and Valentin Sérov. After the Revolution he became a teacher in Fine Arts school 'Bogalioubov'in Saratov and Russian Fine Arts academy 'Ilya Repin'. After that he became a professor at he Fine Arts Academy in Leningrad.